It’s official! According to our peers in the communications world, the team and volunteers at Congleton Beartown Ltd ran the most effective “Best local Community Initiative” in the country.

This speaks volumes for the hard work and commitment that has been put into the project by our school children, teachers and volunteers. Achieved with the assistance of Cheshire East Council and Congleton Town Council and with logistics support from Plus Dane.

The award was made at the Comedy Club in Manchester on the evening of the 15th of November.

Paul Bates MD of Congleton Beartown said “ Sandie Isherwood and Andrea Armitt were present to represent the schools and  the children. Claire Fiddeman, Paul Bates and Dawn Gibbins to represent the team and its volunteers. Having sat through the seminar we went into the awards ceremony. We were a little intimidated by the strength , professionalism and the size  of our competitors, hopes were to say the least on the frail side.

In our sector, the best local community initiative, the quality in this  category was deemed to be so good that a highly commended award was to be given, this raised our hopes for an inclusion. Trepidation continued when this was awarded to Charnwood Borough Council & North West Leicestershire District Council for Don’t Muck Around.

BBC’s Andy Crane then said “and the winner in this category is ……………………  and there will be a big cheer from the left of the room Congleton Beartown Ltd  for Bearmania” Indeed Andy was correct in his prediction, noise ensued.

“We received the award said a few words and spent the rest of the evening letting it sink in.” Paul also added “On receiving the award it makes us realise that our ambitious plans for improving community life in Congleton in 2012 are realistic and can have a positive effect on the people and the area , it goes to prove no idea is a bad idea”

Congleton Beartown is now a multi award winning company as it adds the Golden Hedgehog PR Award 2012 to its collection which includes a HOW DO Public Service Award. 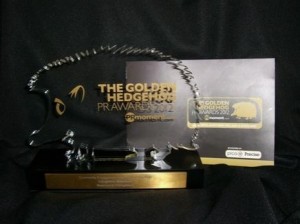 This award was made at The Hilton Hotel Manchester at a black tie gala dinner on the evening of the 21st of March. Paul Bates who was in attendance said “the competition was fierce the PR professional crème de la’ crème being all present in the room is quite intimidating. 20 awards were made during the evening and the Best Community Engagement Campaign of The Year was deemed to be such a high calibre category that a highly commended award was to be given. BBC’s Andy Crane was the master of ceremonies and he announced the winner overall as Congleton Beartown Ltd for Bearmania. As I walked to the stage Andy said “this initiative was now multi award winning, and had structured goals and objectives that it met and exceeded its expectations and was highly successful in engaging with its home audience and a wider audience. The judges commended it on its ingenuity, innovation and highly professional execution.”

To win this award against the wealth of talent and experience on show at the awards is a fantastic achievement for the town.

Mediocrity is not for the “Little Town With The Big Heart”

“Our efforts would mean absolutely nothing without the breath of fresh air ideas which comes from our school children, the communication of those ideas from the teachers and the support from our team who made the event possible. Our thanks must go to that team of Congleton Town Council, Cheshire East Council, Plus Dane, Hammond McNulty, Michelle Jones, Jigsaw RTM, Ravensworth, Beresford’s and Top Nosh who all gave services free of charge. Plus the skills and dedication of the artists, the participating companies and the people of the town and the visitors from far and wide who completed the “Bear Trail”

‘Congleton Means business’ was organised by the Chamber of Commerce, the Town Council and Congleton Partnership and was sponsored by the Inclosure Trust. It was held in the Town Hall to provide information to developers, retailers and investors to promote the town as an attractive area for new businesses. During the first half of 2012 Congleton has seen a record number of new companies being set up which is, in part, an exciting legacy of ‘Congleton Means Business’. 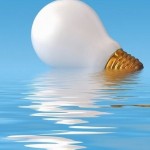 The Town has been successful with a bid for £250k of European Funding through the Rural Carbon Challenge Fund to build the hydro scheme on The Old Weir on the River Dane.

This is a real win/win situation.

River Dane a very fast running river. An ideal place for a hydro scheme is a weir – and we have lots around Congleton because of our industrial heritage.

Four years ago the Dane Renewable Energy Project Group was formed, and they have assessed the Old Weir for suitability and found that the Weir offered a huge opportunity to demonstrate what could be achieved in terms of local renewable energy.

They have been campaigning to get funds and have targeted the Rural Carbon Challenge Fund. Six months and a very detailed 55 page report later they have secured a quarter of a million pounds of EU money to create electrical power from the flow of the river.

It is planned that it will be operational early in 2012. A Community Enterprise will be created so that the earnings from selling the electricity will fund energy efficiency projects around the Town. 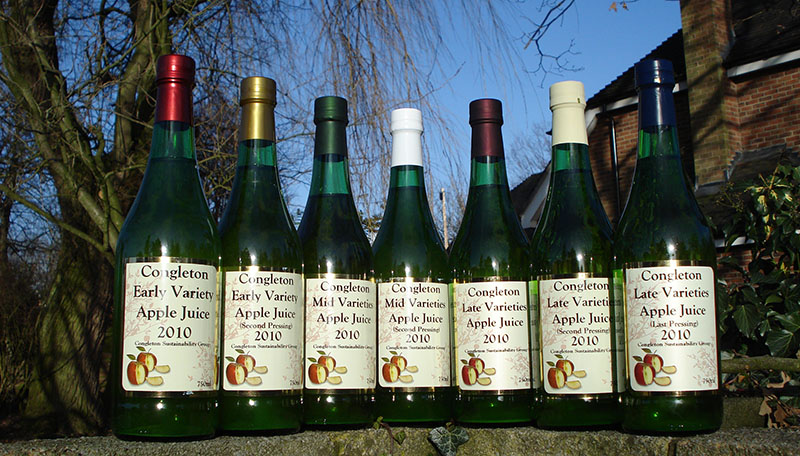 Congleton and its Congleton Apple Juice project is one of six Market towns in the north of England to receive an accolade from ‘Action for Market Towns’ for work to create thriving communities.

The six communities have beaten off stiff competition from small towns across the north of England to win recognition for their efforts to nurture thriving communities entering enter projects into one of four categories: Business & Economy, Environment & Culture, Partnership & Strategic Working and Social & Community.

Congleton Sustainability Group entered the Congleton Apple Juice project into the Environment & Culture category and were delighted to be judged joint winners with Renaissance Knaresborough.

Peter Aston, Chair of Congleton Sustainability Group, when asked to describe the project in 50 words said “In 2010 three tons of Congleton’s home-grown surplus apples were saved from the compost heap, juiced and bottled. Profits from the much-praised Congleton Apple Juice funded mini-orchards in the town’s schools”.

Peter paid tribute to everyone in the town who contributed apples to the project, Astbury Mere Visitor Centre’s help consolidating the apples and Eddisbury Fruit Farm making and bottling the juice.

Peter praised members of Congleton Sustainability Group and the many shops, cafes and restaurants and the Tourist Information Centre who have worked hard selling the juice. Profits from the juice together with funding from Cheshire Community Action and The William Dead Trust have enabled the schools to plant over 85 apple trees to create mini-orchards in all 16 Congleton Schools.

Peter particularly thanked Patti Pinto, of EcoLearningUK.com based in Congleton, for all her hard work creating the mini orchards in the schools.

Chris Wade, the chief executive of AMT said: “The quality and quantity of our entries shows that the big society is flourishing in many small towns across the north of England as communities show the spirit of self reliance”.

“AMT Awards help celebrate and share good ideas across the countries and include planned events where winners will showcase their talents.”

Action for Market Towns (AMT) is a national charity committed to the vitality and viability of our small towns.  They founded the awards scheme in 2004 to recognise and showcase initiatives that are helping our small market towns to adapt to change and flourish.

An overall regional winner will be chosen on 20 June at an event in Middlewich and the winning projects go forward to Action for Market Town’s national award – the winner will be announced in October at a ceremony in Ludlow. They will also be automatically entered for this year’s Regeneration and Renewal awards. The Action for Market Towns National Awards is supported by the Big Lottery Fund.