The Town Council officers, partnership members and councillors working on the Public Realm have been chasing and waiting for an update meeting with Cheshire East. This has now been arranged for the 29 September. The previous meeting was on the 12th May and so hopefully there will be some positive progress to report

Planning is well underway for the Christmas Lights Switch on – Friday 27th November. We are advising in this week’s Chronicle for the charity stalls and craft stalls – so if you want one for your charity get the forms in quickly! We have purchased 5 new bigger lamppost lights to create more of a statement in the High Street. The partnership has agreed to sponsor some 12 ft penguins which will perform 3 x 20 minute slots at the Lights Switch on. As usual we would love help on the night (or in advance). Road Closures from 2-8.30 and event 4-7pm. If anyone is able to help for an hour or more please let me know.

4. Maps for the Town Centre

The Town Council and Congleton Partnership are working together on a project to get location and feature maps into the Town Centre car parks – and into the pedestrian area as part of the Public Realm works. We have had quotes from one company and are waiting for two others to come back. We also need some confirmation from Cheshire East that they can put into the pot and erect on their land.

I have had confirmation from Cheshire East that Balfour Beattie will not now be allowed into the Town Centre in 2015. Not sure what the programme looks like for next year. There appears to be communications issues with the company.

Neighbourhood Plan is getting back into gear with a Steering Group meeting on Wednesday. The second questionnaire will come out in October. We received 1400 responses from the first questionnaire – the results of which are on mycongleton.org and will feature in a double page spread in the next Bear Necessities .

Thank you to everyone who helped with the In Bloom efforts. As a town we have had lots of compliments this year. The results of the NW in Bloom competition will be known on the 30th October and the Community Pride Awards on the 15 October.

The Town Hall first opened to the Public on the 10th July 1866 – and so next year we are looking to host a number of celebrationary events – including a High Tea for descendants of those who attended the original opening, a grand exhibition – providing that the schools are interested. Investigating whether there is a way of replicating the original intention for the shields on the outside of the Town Hall to represent significant local families, and a number of other ideas are still being explored. Anyone that wishes to help with the project or has ideas please get in contact with Jackie MacArthur .

The Chair Steve Foster opened the 9th Partnership Annual General Meeting by welcoming everyone to the event and invited them all to stay to the Executive Meeting that followed on from this meeting if they so wished. Download the full minutes HERE.

Steve gave a brief overview of projects that had taken place / were still active across all of the subgroups. This was not an exhaustive list but a sample/range of the activities The Partnership is involved in.

Back to Back Gardens

Steve closed the AGM by reminding everyone that bringing in new volunteers remains a key challenge.

He talked about the new Partnership dedicated website and the need for all subgroups to play their part in updating information on a regular basis to help improve public awareness of The Partnership.

Succession planning was highlighted, in particularly in Steve’s case as he felt that whilst he would still be involved with The Partnership in some form another, he had served his time as Chair (4 years) and would be working on recruiting a new Chair for 2016/17.

Steve remarked on the importance of continuing to deliver projects and support of community activities that benefit Congleton. He then outlined some of the new projects planned for 2015/16. These included:-

Highlights from the meeting included:

Glen advised the meeting that Congleton Town hall would be 150 years old during 2016. As part of the celebrations CSG may like to consider how we help make the Town hall more sustainable for the future. PA to add a discussion around this item to the next CSG meeting.

Marton (expecting assessment in September), Astbury (to renew by 10 October),

Astbury St Mary’s were runners up in the CE Fibre Guys competition and were invited to display their models at the Tatton Show.

Saint Mary’s Catholic Primary is one of only seven eco-schools to have won a ‘Bees needs’ award from KBT Eco-schools.

Senior health and well-being fayre for all the vibrant over 50’s living in and around Congleton! Join us on the 1st October 1pm-4pm at New Life Church. A range of activities and afternoon tea will be served! See the poster for more information. 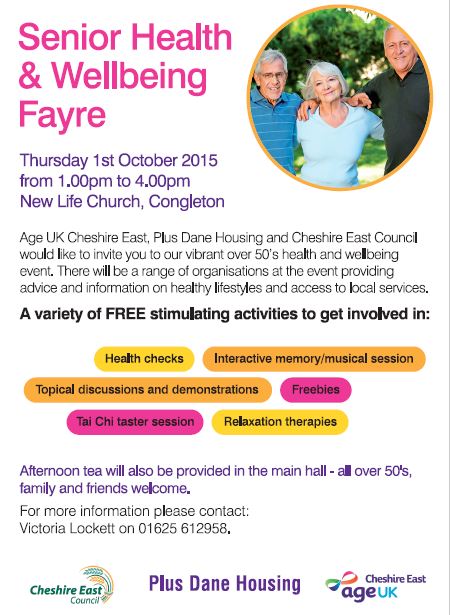 The meeting began with a talk by Peter Broome (New Life Community Partnership) about the formation of this joint project with New Life Church, Mattroe Ltd and Plus Dane. He outlined the operating procedures for supplying families who are in financial, social ,physical and mental need. He explained the ethics and link up with The LOL Foundation and how training and involvement helped in the rehabilitation of the ex-servicemen. A tour of the facility followed.

Forget me not service – Karen Mellor & Chris Birch Plus Dane

Karen and Chris took us through a presentation on the Forget-Me- Not- Scheme that Plus Dane run for both their residents and the wider public alike. The scheme offers a wide range of applications / alarm systems from Pendants, Wrist Straps, Movement Detectors, Panic Buttons, Bed/Chair Sensors etc. A price and product brochure is available on request (MS has sent a copy out although the file is quite large and some mailboxes will not be able to take it) If you wish more information please contact Karen or Chris at:- support@neighbourhoodinvestor.com

The event which will celebrate Older People’s Day on 1st October will be held at New Life Church from 1 to 4pm. The event is being organised by Cheshire East with support from AgeUK CE / Plus Dane.  There will be a main hall exhibition with breakout rooms to facilitate various activities (Tai Chi, Massages, Music etc).

If any of our organisation would like to be there please contact Victoria on 01625 612958 as soon as possible.

Usman is putting together an advert to support the event, MS to circulate once received. Please get this out to all your clients/ members, also display wherever you can.