E.Mail from Robert Rodgers Oct 2017:-
The project team are in the process of concluding the procurement phase with Final Tenders anticipated to be received mid November 2017; bids and designs will be evaluated by the project team with a view to recommending a preferred bidder to Cabinet in January 2018. Bidders have already submitted initial designs which have been refined through the dialogue process in an effort to deliver the optimum solution within the £8.2m budget. The team are enthusiastic with all of the bids received to date, in terms of design and offer for the redeveloped leisure centre. As a brief reminder, the minimum requirements are for a new swimming pool and pool hall and a redeveloped dry side offer. We look forward to receiving final tenders and recommending the successful solution to Cabinet and submitting this for subsequent planning approvals. We anticipate that subject to securing the necessary approvals, work will commence on site in Spring 2018. The successful bidder will work closely with the project team and ESAR operational staff to phase the construction works to manage and minimise the disruption to leisure centre and park users.

Dementia Friendly Town.
Dementia Steering Group has now met twice and set goals to achieve 100% Dementia Awareness in Congleton and organise 4 regular activities each month. Next meeting planned 12th December.
5 Dementia Friends Awareness sessions being run over the next 2 weeks for Councillors, Staff and Residents. Business sessions will be arranged from January onwards.
Jo and Vince see Art as a possibility (as an activity –once settled in their new home).

Heritage Trail Project.
TMC are working with Rural Development to get funding to develop the App.

CTC / Partnership will remain as a customer and have the option to develop a trail and hot spots.
The Heritage App meeting minutes are still current.

The event was attended by more than 60 residents and supported by 36 exhibitors. It covered four key subjects of The Community, Technology & Finance, Winter Wellbeing and Health. All 4 elements were well support with great advice, information leaflets, freebies and in some cases free to attend workshops.

Practical sessions included ITea and Chat, Talk on Scams and how to recognise them and a session on how to become a dementia friend.
Everyone there enjoyed the free tea and cakes and in some cases took the opportunity to socialise with other residents well after the event had finished.

Next year we may well look to combine the event with a Macmillan Coffee Morning as the two activities fall on the same week. 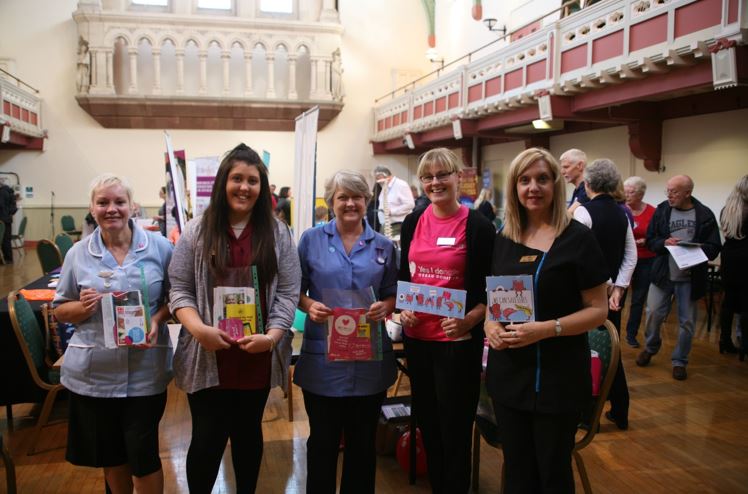 Claire Halsey suggested that we should look to set ourselves some goals to target and work towards.

Goals.
1. Aspiration for 100% of the general population to become Dementia Aware by:-
(a) Friends awareness sessions –Currently we have a number of sessions organised, CTC 30th Nov, 6th & 7th Dec.
Museum Sat 2nd Dec 11.00am ans Sun 3rd Dec 2.30pm
(b) Champions workshop, Jess to set one up for 1st Qtr 2018.
(c) Publicity. D.Ritherdon to kick this off using The Chronicle, PCSO to support through social media.
(d) Video online – can give a first taste of Dementia Friends and may be a good way for larger companies to get the message across to their staff.

2. Events / Activities x 4 regular per month.
Members to come to the December meeting with ideas/ proposals of activities they can do on a regular basis(Weekly, Fortnightly or Monthly)
Irregular Activity. Cotton Club, Kings Arms have shown some interest.
Leisure Centre- Mixed changing. MS to discuss with Maria Tatters at Congleton Leisure Centre.

Dane Valley Community Energy.
No real change from the last meeting. Still waiting for wall renovation to take place.
Issue around Derwent Engineering and when they would be able to commit to the work. Still hoping for Spring 2018 but could be more like Spring 2019.
Community Share drive will be dependent on the above time table.
Extraction permissions have been sent to the Environment Agency, full planning application should go in by the end of the year.
Next newsletter should be out soon.

Neighbourhood Plan.
Monday 13th November is the last day of the 6 week consultation process. The steering group will then meet to discuss the results of the consultation and add anything significant before forwarding to Cheshire East to prepare for the Regulation 15 stage.
The final stage to adoption will be a public referendum. This completed document will include a delivery plan of actions which will help some of our long term project planning.

The Old Saw Mill .
Café. This is going very well and showing a 600 to 700% on last year when first opened. More staff have been taken on both paid and volunteers.
PR /Events. Harriet is working towards her NVQ Level 3 and making great progress getting our message out to the general public with some god turnouts resulting for our recent activities.
Partnership. PA wished to record OSM’s thanks to The Partnership for its financial support in the extra power sockets and equipment required to meet our energy demands with all that is now going on at the centre.
AJ, Cider & Vinegar/ CSG relationship. PA /DJ reported on the substantial growth in both production and overheads since taking the drink production in house. The upfront purchasing of bottles, labels and various pieces of equipment that was previously the responsibility of the outsourced juicer has had to be met by OSM. Two directors have loaned the OSM close on £5000 which will need to be paid back through sales/ 2017/18 profits.
Once this has been completed then an agreement will need to be reached between OSM & CSG on the level of profit that should go towards future operating costs and towards CSG projects. PA, DJ & PR are working on a paper which will lead to a PENCE per bottle agreement (30p/40p) which will then be annually negotiated.
CSG will need to draw up a list of potential projects (possible ideas drawn for the emerging NH Plan) which can then be made public and meet our community promise to use AJ to improve our environment.
Storage for the product is an issue, the Community Store at The Park has no space available, if anyone is aware of places that may be of use please let the production team know.
DJ shared a recording document with the group. This shows production Volumes, Dates and Batch Codes by Product on one spreadsheet, with Sales by Batch Code, Type and Quantity on another. This will be vital information for various reasons as the “business” grows and accurate stock and sales figures become a requirement.

Green space / In Bloom – P.Pinto.
MG. Major successes for Congleton In Bloom, with Gold and Best Small Town in the North West, which once again puts us into the Britain In Bloom National Competition. So plenty of new ideas and commitments for 2018. PA stated that The Rossendale Trust involvement at OSM may offer an opportunity for work with them on improving the environment in the around the area local to OSM.

Items for discussion and action included:-

Drop In’s which offer Activity for The Person with Dementia and a moment to relax over tea and cake for the Carers. (issue raised at July Dementia Awareness Day)

Dementia in its widest form now affects over 850,000 people and it is projected that by 2020 that figure will be well over 1 Million. This will be our most important project over the coming months.

Around 60 members of the public attended the event which was somewhat hamper by the very poor weather at the beginning and a clash with a lot of local Macmillan coffee morning activity. We need to look at timing for future events, hold it later in the day or change the date completely.

It was felt that we should keep the format, it was well supported by service providers, the talks were well received but not as well attended as we would have liked (Scamming and Dementia worth keeping).

The group thanked Alyssa for all the excellent work she had done driving this project and wished this to be recorded in the minutes.

Sub group for next years’ event to be formed around Easter.