Well, I’m now the proud owner of an email address Bobbearcong@cvsce.org.uk . Apparently this will open up a whole new world to me! 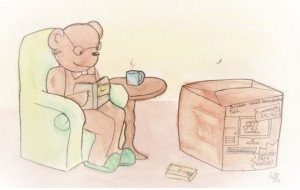 I’ll be able to do my shopping while still sitting in my front room.  Funnily enough my old front room was only a stone’s throw away from our local bargain store – otherwise known as May Brogan’s!! I have it on good authority that when May passed away she was such an icon in Congleton history, that the editor of the Chron wrote her eulogy himself, saying that it was far too important to hand it over to a reporter!   Back to shopping – I have done some –online …with  help!   I’ve ordered a much loved  book from my youth that I’d love to read again – “The Blue Book Guide to Cornwall”  Got it from www.Abebooks.co.uk  – not touting for trade here  but it seems good for the old and obscure books ( Remember a few years back – “Fly Fishing” by JR Hartley?)  Getting back to the point, we used to go to Cornwall  every Summer, so getting the book will really bring back memories.     I think it’s lovely re-visiting good times in your life.  I love getting out the photos – they’re kept in an old biscuit tin in the cupboard and everybody crowds round to see who they can recognise!

Memory is a strange thing – you can remember things so clearly from 60 years ago but forget what day it is!   So I was interested in going to the ‘Dementia Together’ event last week, and I was so impressed with the work that’s going on behind the scenes to help people who are living with alzheimers disease or dementia, or who can become forgetful or confused.    For example the staff at Crewe station have all had dementia awareness training, and there is a ‘safe’ room at the station complete with memory boxes and memorabilia – things to help someone in distress to find their bearings until a family member arrives.   I think that’s so caring!

I know that using public transport can be a bit tricky and scary if you’re feeling fragile!

But did you know that people living with alzheimers disease or dementia can apply for a ‘disability’ bus pass which ensures extra support from the driver – like  he won’t start to drive away until you are safely seated and he can see you are OK.   You can apply for these bus passes at Congleton Library.

Whatever you age, it’s good to keep the old grey matter moving – so here’s a few more ideas for keeping on keeping on…

Heathview – top of Heath Road in West health, opposite the shopping precinct on Sandbach Road, has a good selection of things going on and it’s open to any older person  who wants to join in – there’s a reading club on Tuesdays 2.00pm-3.00pm, board games Thursday 2.00pm-4.00pm and Needles and Natter on Sundays 2.00pm-4.00pm.    If you want to check it out or to book a place, give Wendy Townley a ring on 01260 281484

Phew – just not enough days in the week!!    And don’t forget if you are computer savvy you can email me at Bobbearcong@cvsce.org.uk – let me know about events or useful info and I’ll gladly pass it on.

Bob Bear signing out till next week…… 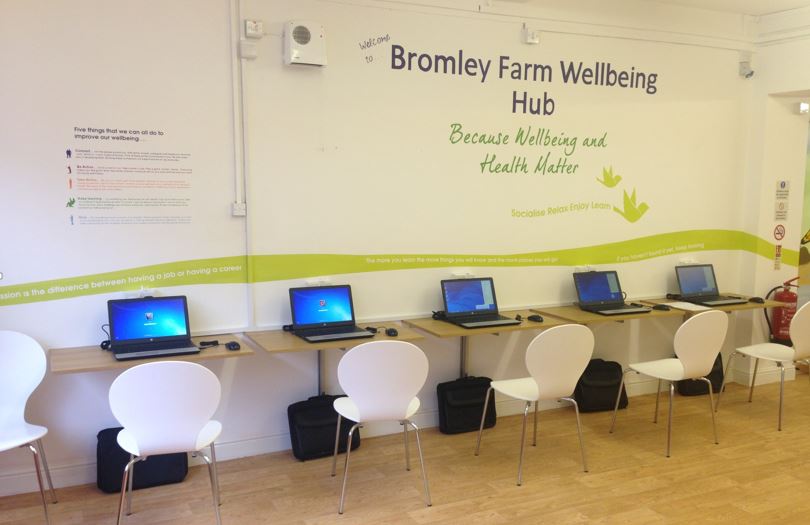 Job club at Bromley Farm Wellbeing Hub every Tuesday morning, 9:30am until 12 noon. Receive help with: 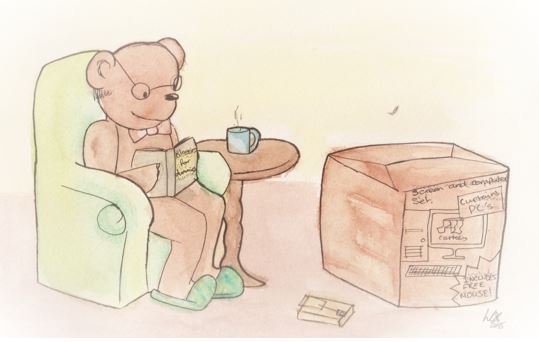 Bob is a born and bred Congletonian, and in his younger days lived in Back Park Street with his family. Bob says he’s getting on a bit now, but he’s in the know about anything worth doing or hearing about as far as older people are concerned .  Over to you Bob……

I love my back yard, I grow lots of things in pots and I’ve got a nice little border that catches the sun – the best this year have been the bright orange marigolds and the antirrhinums tall as you like!   But I don’t have the space or energy for growing any veg these days. – it’s a shame.

Then I got a phone call from  Victoria at Age Uk, and she tells me that from the beginning of October they’re taking over an allotment plot at the Hilary Avenue Allotment Association.

They want volunteers to help  – people who’ve got gardening, planting and growing skills .

Do you know I’d love that!   I could do as much as I like and not have the worry of maintaining the whole plot on my own – I’m going to give it a go, do you fancy joining me?  Victoria says to give her a ring on 01625 612958 .   Or do the email thing victoria.lockett@ageukcheshireeast.org

Yep, a bit of gardening helps  keep me ‘ in the pink! ‘   And that reminds me, I’ve had a letter from the Doc saying I can have a CVD check – cardio and diabetes.   Have to go up to the War Memorial for a blood test first (must remember no supper or brekky that day!)  but then the nurse sees me and tells me how I’m doing and the likelihood of me developing problems.   Like they sat ‘prevention is better than a cure!’   Sounds like a good idea to me.  I’ll let you know how I go on…

Bob is a born and bred Congletonian, and in his younger days lived in Back Park Street with his family. Bob says he’s getting on a bit now, but he’s  in the know about anything worth doing or hearing about as far as older people are concerned .  Over to you Bob……

At my school we used to learn to recite poems – don’t think the kids of today do that kind of thing anymore.    But Monday mornings at St Stephens’ that’s what we did.   So it wasn’t surprising that yesterday I woke up reciting ‘Ode to Autumn’ – John Keats  – one of my favourite poems from school days.   Says it all –

Autumn, season of mists and mellow fruitfulness…..!!  And… time to put the garden to bed for the Winter!  I need to find the time to bring in the begonias and geraniums before the frost gets them! Can be a funny time of year though – I often feel a bit down when the nights draw in.  I think it’s good to have things to do and things to look forward to.  A couple of things I will be going along to.- .Wednesday afternoon’s friendship club –known as FIR –Friends In Retirement.   A Cup of tea, another cup of tea, piece of cake, a few games of bingo, a raffle, lots of chat, and sometimes a talk on something of interest to us more senior citizens.  And all for a couple of quid!  And of course wherever Joan Myatt is you will be sure of a very warm welcome.  So put it in your diary, St. Mary’s Parish Centre, West Road, 2.00-4.00pm.  Wednesdays.   Another good one is the two- course hot meal at Wellspring Church up Canal Street.   It’s called ‘Senior Diners’, the last Wednesday in the month.  You can just have the meal or you can stay for the speaker afterwards – it’s up to you.  It costs just £4 and you need to ring Arthur on 01260 275 568 to book your place

Part of my ‘Getting ready for Winter’ is to get my flu jab sorted – I’ve missed the September ones so I’m popping down on 18th November.   And don’t forget if you’re not 65 yet or not entitled to a free jab, it costs less than £10 in most pharmacies-  even some of the supermarkets do it now, so add it to your shopping list!

I had quite a bit of interest after last week about that CVD check I had (Cardio Vascular and diabetes).  So just for the record, those checks are available to anyone over 40, and you can have them every 3 years.   They only cover things like blood pressure checks, risk of heart disease and diabetes so they don’t check for cancer .   My doctor sent me an invite but not all surgeries do it that way so you might have to ask.

But don’t all rush at once….I’ll be in the soup for overloading the system!

I’ve so much to say this week – but I must pass this on today or you’ll miss it!  Our CAB (Citizen’s Advice Bureau) are marking Big Energy Saving Week with an event at the Plus Dane Bromley Farm Hub on Parnell Square, off  Woolston Avenue, on Thursday 29th October from 12-2.00pm.  People can come along to get energy saving tips and advice on switching supplier, dealing with complaints etc., there’ll also be lots of freebies give-aways.  So if like me you don’t like wasting money it’s a ‘must’

Introducing a new columnist – Bob Bear will be sharing his weekly Blog.

Bob is a born and bred Congletonian, and in his younger days lived in Back Park Street with his family. Bob says he’s getting on a bit now, but he’s  in the know about anything worth doing or hearing about as far as older people are concerned .  Over to you Bob……

Well this is a first for me …  a Blog!!!  A friend is typing this up for me as I can’t use a computer (YET!)   I suppose it’s because I know a lot of people in Congleton that I get to know what’s going on.  Only this week I got an invite to the Congleton Senior Forum –WOW !  I found out some valuable stuff.   I thought you had to be a Plus Dane tenant to get one of those alarm thingies.   But No!  Karen from Plus Dane told us about all sorts of technology that you can buy for a few pounds a week .   There’s a pad for the bed  – if you’re taken short in the night (no, it’s not what you’re thinking – stay with me) and you have a funny turn, it knows you ‘ve not got back into bed and it alerts the care team who come and check .   Isn’t that amazing?   There’s a thing for your wrist too– if you fall or trip it knows and sends an alert!  And there’s loads more.  Call Plus Dane on 0800 169 2988 and ask for a visit, and Karen says there’s no pressure to buy –beat that!!   If you are computer literate ( jargon for  if you can use a computer) you can email them at support@plusdane.co.uk.

As you can see from my pic I’m not very computer savvy!   But Alyssa who I’ve met at the Senior Forum – she’s a Community Agent – is going to come to see me and explain some basic stuff about emails.   And even better she knows someone who can get the thing out of the box and up and working –one of their volunteers, a computer expert who can fix the  technology or teach people how to use it properly. Fantastic I say!!

For older folk computer stuff can be life –changing.   Did you know you can even do your supermarket shop without leaving home!    If you’ re scared of computers and don’t want to be learning in a group with other people give Alyssa a ring on 07901787272